The History of North Fort Myers

In the late 1700’s Jose Gaspar was a dashing Spanish Navy officer, with a passion for adventure and danger. This included courting several young ladies, one of whom was the daughter-in-law of the King.

When the failed romance became an embarrassment to the young lady, she determined to get even with Gaspar by wrongfully accusing him of plotting to steal the Crown Jewels. When Gaspar heard that King Charles III had ordered his arrest, he commandeered a ship called the Floridablanca to make his escape.

Gaspar brought the Floridablanca to the Gulf coast of Florida, and Charlotte Harbor, which today is the North Fort Myers / Fort Myers area.

Angered over his mistreatment by the Spanish Royal Court, Jose Gaspar vowed to plunder any ship flying the Spanish flag. Now calling himself “Gasparilla” his career as a pirate began in 1783 and continued for almost four decades, ranging over the waters of the Gulf from North Fort Myers to Cuba. Gasparilla conspired with other pirates of the day and the area, including the famed Jean Lafitte, and targets soon included ships of all nations.

By 1821 Florida was under the control of America, which was very serious about eliminating the threat of pirates from its waters. Now in his mid 60’s – a remarkable longevity for a pirate – Gasparilla decided to “retire”.

The accumulated treasure of decades of plundering was brought together in ten large chests on the Florida beach, to be divided among the crew, as was the tradition of the pirate.

Legend has it that Gasparilla plunged off the bow of his ship still with cutlass in hand and was never seen again. The remaining crew were either captured or killed.

Meanwhile, the trusted crew that had been stationed on the beach to guard the treasure witnessed the battle and the sinking of the Floridablanca. They promptly ran away, taking with them the ten treasure chests, which were buried in various places throughout the North Fort Myers / Fort Myers region – where they remain undiscovered to this day.

From the start, North Fort Myers was a collection of settlements brought to life by pioneers attracted to the pristine and heavily wooded wilderness north of the Caloosahatchee. The early names for the area included Samville, New Prospect, Bayshore, Cabana City and even Woodrow for Woodrow Wilson. By the early 1900’s North Fort Myers had a population of 50 and it was the hub of milling activites for processing old-world stands of pine trees brought in from eastern Lee County near Hickey’s creek. While North Fort Myers is steeped with history, today it is a community poised for growth. 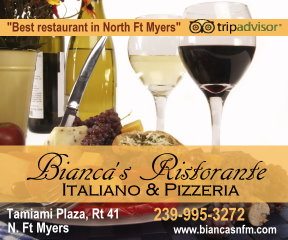